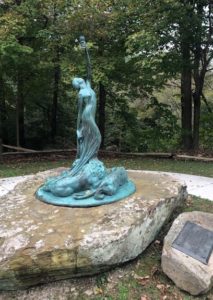 This statue, set at Turkey Run State Park near Marshall, Indiana by the Women’s Press Club of Indiana in 1922, is a tribute to Juliet Strauss.  It is entitled “Subjugation”, showing a female figure subduing animals that represent specific vices.

Inducted into the Indiana Journalism Hall of Fame in 2001, Mrs. Strauss was known during her writing career from 1905 until her death at age 55 in 1918 as “The Country Contributor” for her columns published in the Indianapolis News and the Ladies Home Journal on women’s daily lives at the time.  She drew upon her own background as the daughter of a mother who valued education and to many homemakers across the nation, Strauss restored the role of the woman in the home.  She was also known to have written an impassioned letter to the governor of Indiana which sparked a movement to preserve the 2400-acre Turkey Run State Park near her hometown of Rockville, Indiana.

In her words: “I hope my women friends will begin a reform with resolutions to be less like somebody else and more like themselves, to do as they wish to do, not as some other woman sets the pace.”

Well before her time, Mrs. Strauss was in fact foreshadowing the Lean In movement, which emphasizes women pursuing their ambitions, whatever those may be.  It was an honor to learn about her.